How civilization ends, not with a bang, but a guffaw

Evidently, adult "onesies" are what all the seriously hip people in the UK are wearing. 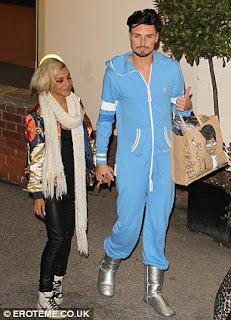 Open the gates and let the barbarians in; this civilization's done for.
Posted by Walt at 2:48 PM No comments:

The Imperial City Council has decreed . . .

The Portland City Council went all in, declaring that no retailers can offer plastic bags, and all must offer paper bags.  The mayor says that this is because the plastic bags get into the ocean, citing no evidence of any kind.

I just wonder how it is that the grocery bags get to the ocean, as the mayor has noted.  For that matter, I wonder what color the sky is in the mayor's world, and can he hear it when the butterflies blink.

Anyhow, paperbags are only somewhat recyclable and much of them end up turning into a nasty substance in permanent landfills.  When they get recycled, you get paper stuff.  Plastic bags are also recyclable, and require less energy to do so, and there's lots of high-value products made from the plastic.  For that matter, the plastic bags could be, themselves, a product of recycling.

Anyhow, I, for one, think plastic grocery bags are superior to paper grocery bags, and I think that the Imperial City Council of Portland is populated by morons whose egos have sucked their brains dry.

But you know what?

In other words, the issue isn't just the relative merits of paper or plastic.  The other, greater, issue, is who is the boss of you.  And I've got a good idea how the city council thinks about that.
Posted by Walt at 8:36 PM No comments:

Always listen to the man with a badge and a taser, boys and girls, for he is your friend and will save and protect you . . .

A clear case of contempt of cop.

Pinellas Park, Florida -- Daniel Jensen wasn't running from the law, he was trying to protect his home from burning up. Yet, Pinellas Park Police tasered him in the process. Jensen and his attorney say it's an excessive use of force.
Jensen was still shaken and visibly emotional as he retold what happened last Thursday evening. He said being tasered by police has not only impacted him, but it also impacted his children, who saw it all happen.
He described the Pinellas Park Police officers actions as "brutal." He said they showed "no compassion."
"All I remember is laying in water, being electrocuted for saving my home," said Jensen.
Four days later, burns on Daniel Jensen's body still mark where the stun gun's probes hit him. He says they tasered him for doing what any father and husband would do protect his family's home from an out-of-control grease fire.
The 42-year-old father of two recalls his wife waking him around 6 in the evening, saying there's a big fire at his neighbor's house.
"I could hear it, I could feel it," he explained.
He ran outside and grabbed a fire extinguisher. He sprayed it until it was empty.
"I was calling for my daughter and getting no response. I came out, grabbed the hose and sprayed her room until I heard she was out. I was always taught to help when you can; help is what I tried to do," said Jensen.
He continued to recount the events. He said he then took the garden hose and started watering down his fence and the back corner of his rooftop, trying to prevent the fire from spreading to his property. But with each attempt, Daniel said Pinellas Park Police kept pulling him back... even though firefighters were not in sight.
"They kept telling me, 'Let it go, that's what insurance is for.' That's not acceptable to me," said Jensen.
Captain Sanfield Forseth with the Pinellas Park Police Department said officers could have charged him with obstruction for not listening to an officer's orders.
"I wasn't doing that. What I was doing was what any home owner would do to protect a family and home," said Jensen.
Captain Forseth said the department will not be charging him.
When Jensen saw the fire jump on to his back roof, he again grabbed the hose. That's when he said -- unknown to him -- a police officer pulled out a taser and fired it at his back.
"As I went to grab the hose, I hear an officer on this side. There was a boat here; he was just behind it. He said, 'Hit him, hit him! Take him down, tase him!'" explained Jensen. "I didn't know they were talking to me, or about me. I was concerned about putting water on the fire, and the next thing you know I'm being tased."
Daniel said a Sergeant ordered an officer to tase him, but the officer never warned him as department policy requires.
According to Pinellas Park Police policy, an officer will use a taser when "other control techniques" would likely result in a "physical confrontation" that may cause injury to the officer or person. But the officer must first give a "verbal warning" that he is going to use a taser.
After tasing Daniel, he said several officers picked him up, carried him to the front yard, threw him on the ground and handcuffed him.
Daniel says he's very disappointed in the police department.
"They should have more tolerance with the public, to exhaust all options before firing electricity into somebody, handcuff them instead of tasering them."
Daniel said about the experience as he fights through tears, "It was horrible. I was laying in a puddle of water being electrocuted here by the people that are supposed to protect us. I'm trying to protect my family, my neighbor, and they bring harm to me. I don't understand."

Captain Forseth with the Pinellas Park Police Department said they exhausted all other options, and that their goal was to keep Daniel and the officers safe from the fire.

The cops are supposed to  be law enforcement.  To you and me, and most cops, that means, they have special powers of arrest in aid of enforcing criminal laws and they have a duty to do so.  But some cops . . .

Here, cops ordered this guy to stop doing what any normal person would do in such an emergency -- he wasn't committing any crime.  No crime, no special cop powers.  But he ignored their orders.  So he had to be tased.  For his own safety.  And this was probably an "obstruction of justice" according to the chief cop, because he wouldn't stop doing what he had a legal right to do, at the command of a cop, based on the cop's uninformed and untrained opinion -- backed up by a badge and a taser.
Posted by Walt at 10:19 PM No comments:

It's about hand.  The issue is, are you willing to dump devotion, reverence, reliability, and competence in order to get the upper hand?

You know the answer.  The entire steady march of 19th century Marxism through the 20th century is all the proof you need.
Posted by Walt at 9:26 AM No comments:

Since the first 9/11 Al Qaeda has been reported to have been in recession, as its various participants periodically blew themselves up, or got shot, or were vaporized by a drone.

The economy of the U.S. has likewise been receding.

Now, with the second 9/11, it seems that Al Qaeda has revived itself a lot more successfully than our economy.